In the United States, millions of miles of pipeline carrying everything from water to crude oil. The pipe is vulnerable to attack by internal and external corrosion, cracking, third party damage and manufacturing flaws. If a pipeline carrying water springs a leak bursts, it can be a problem but it usually doesn’t harm the environment. However, if a petroleum or chemical pipeline leaks, it can be a environmental disaster. 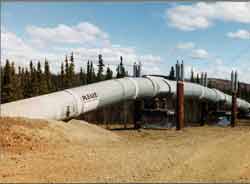 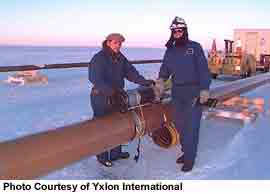 More information on recent US pipeline accidents can be found at the, National Transportation Safety Board’s Internet site. In an attempt to keep pipelines operating safely, periodic inspections are performed to find flaws and damage before they become cause for concern.

When a pipeline is built, inspection personnel may use visual, X-ray, magnetic particle, ultrasonic and other inspection methods to evaluate the welds and ensure that they are of high quality. The image to the left show two NDT technicians setting up equipment to perform an X-ray inspection of a pipe weld. These inspections are performed as the pipeline is being constructed so gaining access the inspection area is not problem. In some areas like Alaska, sections of pipeline are left above ground like shown above, but in most areas they get buried. Once the pipe is buried, it is undesirable to dig it up for any reason. 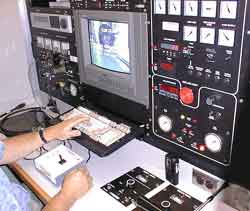 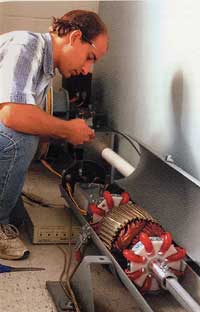 So, how do you inspect a buried pipeline?

Have you ever felt the ground move under your feet? If you’re standing in New York City, it may be the subway train passing by. However, if you’re standing in the middle of a field in Kansas it may be a pig passing under your feet. Huh??? Engineers have developed devices, called pigs, that are sent through the buried pipe to perform inspections and clean the pipe. If you’re standing near a pipeline, vibrations can be felt as these pigs move through the pipeline. The pigs are about the same diameter of the pipe so they range in size from small to huge. The pigs are carried through the pipe by the flow of the liquid or gas and can travel and perform inspections over very large distances. They may be put into the pipe line on one end and taken out at the other. The pigs carry a small computer to collect, store and transmit the data for analysis. In 1997, a pig set a world record when it completed a continuous inspection of the Trans Alaska crude oil pipeline, covering a distance of 1,055 km in one run.

On some pipelines it is easier to use remote visual inspection equipment to assess the condition of the pipe. Robotic crawlers of all shapes and sizes have been developed to navigate the pipe. The video signal is typically fed to a truck where an operator reviews the images and controls the robot.