1.In a feed through encircling coil eddy current system, what would be the purpose of running a calibration defect several times but in various positions (such as top, bottom, left and right)?

2.In a feed through encircling coil eddy current system, a calibration standard may be used to:

3.A calibration standard may be used with a spinning probe eddy current instrument to:

5.A product can be viewed in terms of electrical magnetic effects. A diameter change of the product in an encircling coil is:

6.In figure 9, AC flowing through a primary coil set-up a magnetic field and causes a flow of eddy currents in the rod. The voltage of the secondary coil is dependent upon:

7.Which of the following is not a method that may be used to improve the signal-to-noise ratio?

8.In eddy current testing, the theoretical maximum testing speed is determined by the:

9.In eddy current testing of ferromagnetic materials, the dc saturating field may be provided by :

10.Which of the following is a property of eddy currents induced in a conductor by an encircling coil?

11.Which of the following is a property of eddy currents induced in a homogeneous conductor by an encircling coil?

12.Which factor does not affect the phase shift between the transmitted signal and the reflected signal for a reflection type coil(assuming the part is nonferromagnetic)?

13.Lift-off certainly reduces the amplitude of the flux leakage signal. The other significant effect it has on the signal is a change in:

14.The tubular product parameter having the greatest influence on the flux density of the magnetic field in the part (assuming the magnetizing force, H, remains constant)is the :

15.Any handling of equipment used in an eddy current system must take into consideration:

16.An eddy current system lends itself to quality ratings such as “Quality Number” where the product being inspected:

17.When inspecting material with eddy currents in an automatic handling system, it is advisable to calibrate and adjust the sensitivity levels to:

18.A distinct advantage of using handling equipment in an eddy current test system is to reduce the error caused by:

20.Why is it desirable to hold the factor or lift-off constant?

21.The reactance component is decreased by placing a conducting object in the coil’s electromagnetic field. Why is this so?

22Test coils may be shielded with conducting material or magnetic material to:

23.When a magnetic bar is placed in the coil’s electromagnetic field,the coil’s reactance is increased. What causes this phenomena?

24.When an excitation voltage is applied to a primary winding, only the magnetic flux is in phase and the secondary magnetic flux is minor. When a test object is inserted in this coil, what action takes place?

25.The test coil excitation current should be held constant so that the test piece information obtained by an eddy current system will:

26.Eddy currents flowing in the test object at any depth produce magnetic fields at greater depths, which oppose the primary field, thus breducing its effect and causing what kind of change in current flow as depth increases?

27.Skin effect causes eddy currents to tend to flow near the surface of the test piece. Which of the following factors alter the skin effect?

28.Which of the following is not a common undesirable effect to the test caused by the testing environment?

39.There is one function that responds to variations in eddy current flaw and magnetic field conditions. This function actually produces the output signal from the coil. What is this function?

30.The inductive reactance of a test coil, which is one of the most importance impedance quantities, depends upon which of the following?

31.An ac current produces eddy currents in a test object. The vector Hp represents the secondary ac field in the test piece. What function occurs to produce a workable test situation? (See figure 10) 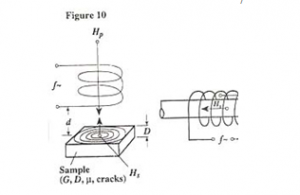 32.To separate cracks and diameter effects for steel cylinders, the optimum frequencies correspond to f/fg ratios of less than (see figure 11) 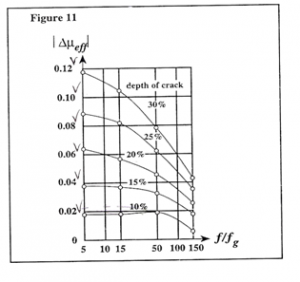 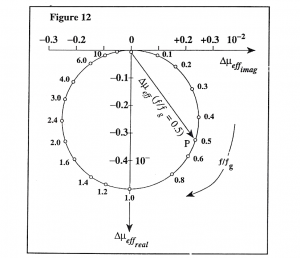 34.Figure 13 indicates that the largest eddy current indicates from subsurface cracks will occur when the frequency ratio(f/fg) is: 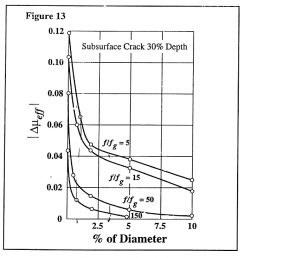 35.Figure 13 indicates that the magnitude of a signal from a surface crack will increase when the frequency ratio(f/fg):

36.Figure 14 indicates that when inspecting for surface cracks in nonferromagnetic cylinders, the optimum frequency ratio (f/fg) is between : 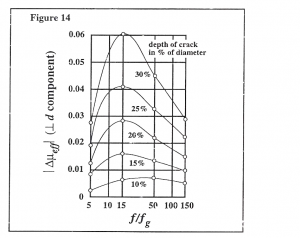 37.An operating frequency of 100 khz will have the deepest penetration in:

38.As the operating frequency is increased, the impedance of the empty coil:

39.Disadvantage of using a surface probe coil for the inspection of small diameter tubing include:

40.Differntial coil system can be of which of the following types? (See figure 15) 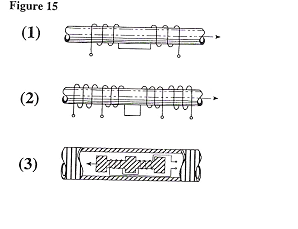